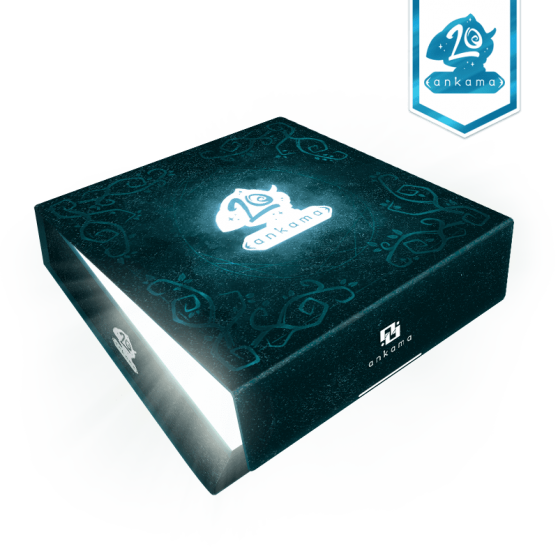 We don't know if turning 20 makes you invincible (to quote a famous pop bard), but what we do know is that Ankama's 20th anniversary is making us ecstatic! So obviously, we couldn't help but whip up a special jam-packed anniversary pack for you, which comes in a numbered* collector's box!

[For technical reasons, the 20th Anniversary Pack is not compatible with other purchases, so you cannot add other items to your cart.]

All your items will be shipped on December 2021 (when this item will be available in stock).

To celebrate its 20th anniversary, Ankama is offering you a pack filled with a few little things that might just make daily life a little better for you (and nothing less). Here's what's inside:

- an all-new map of the World of Twelve measuring 60 cm × 40 cm, with comments by Joris himself,

- a "Krosmic Dance emote" item that can be used in early access in DOFUS and DOFUS Touch,

- a "Julith Costume" item that can be used in early access in WAKFU,

- and even, EVEN… a pair of underwear! (100% cotton and designed in partnership with Armor Lux. Just so you know, we put everything into it…)

The 20th Anniversary Packcomes in a numbered collector's box with a certificate of authenticity.

* The numbering of the box is identical to that of the figurine, but different from that of the pin.

Welcome to a lush universe with a mix of adventure, humor, and magic! There, you'll encounter terrible creatures and meet the most renowned warriors in the World of Twelve.