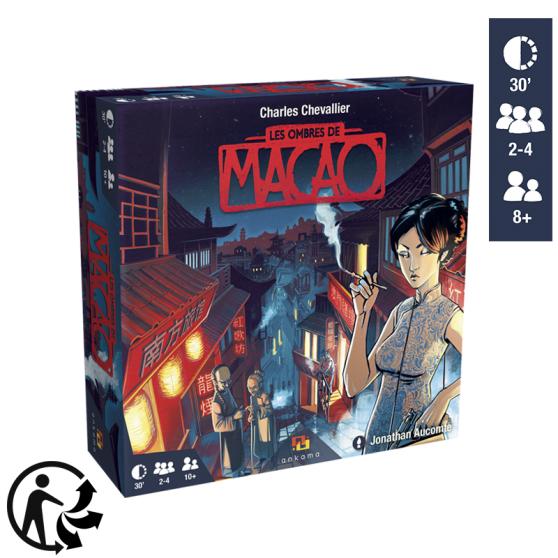 Welcome to Macao, where gaming rules all! You find yourself at the head of a triad in this city rife with corruption. Will you be able to carve out a place for yourself and grow your enterprise into an empire? Take control of the main – and more or less legal – markets, contact informers, recruit new members, and rule the city of vice.

Shadows of Macao puts players at the head of rival triads in the city of the same name. Each turn, each player must choose between:

- contacting an informer to obtain certain resources one time;

- recruiting a new member (which costs resources but gives the player permanent access to resources by having someone devoted to them and lets the player make use of their unique talents as a killer, dealer, etc.); or

- snatching up property, which turns a profit.

As the game progresses, resources pile up faster and faster in front of each player. The race to control the city speeds up. As soon as all the buildings have been bought, or a player has recruited 7 members, the game ends and the wealthiest triad wins.