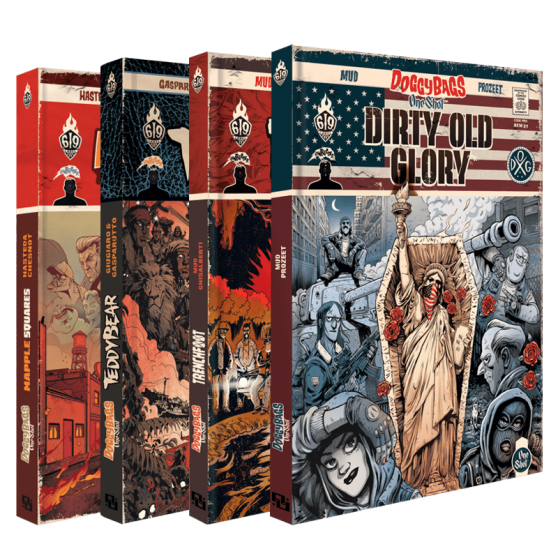 Teddy Bear, Mapple Squares, Trenchfoot and Dirty Old Glory – get all four volumes of Doggybags in a complete set guaranteed to get you down and dirty.

Mapple is a small town of 300 residents located in Nebraska – somewhere in the middle of the USA – that owes its glory to its old candy factory, Mapple Squares. Since the confectionery closed, everything's fallen apart: Mapple's now a ghost town, whereas the former confectionery has become a sanitarium for the mentally ill, or rather… a psychopaths' retirement home!
Two agents from the FBI go there to investigate mysterious disappearances.

The hallucinated and nightmarish path of Odrissa, a young child soldier in an imaginary Africa ravaged by civil war. It is both a coming-of-age quest and a search for a childhood perhaps lost forever. A tale of horror and magic, and solitude and meetings.

“If I woke up a millionaire tomorrow, what would I do with all that money?”

Everyone’s probably wondered about it at some point. Buy a house? The ultimate ride? A trip around the world?

“None of that crap,” Sid Widow would say. Because all the money in the world won’t make him any less of a dumbass.

Brought together by survivalism and the rejection of a society in rapid decline, Carl, Enapay, Pulp, Benedict, and Fritz face an attack. Yet another one since civil war broke out. Cornered, they'll have to wait, patiently and hopefully, for someone to come save them. It offers the chance for each of them to share an often tortured past… Will their shared values alone get them through this challenge?