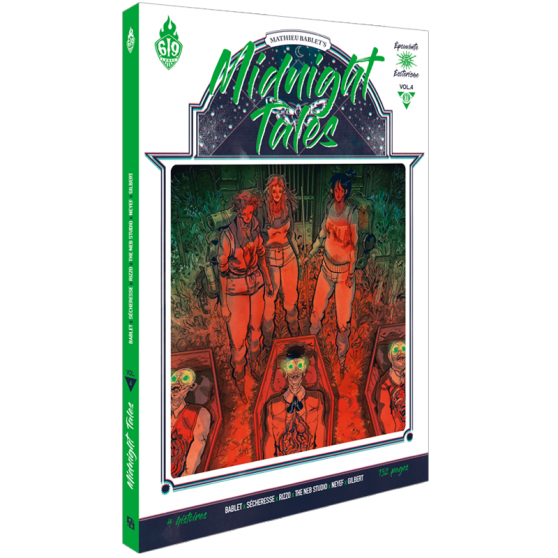 The series orchestrated by Mathieu Bablet (Shangri-La) is back with a new opus combining, as brilliantly as before, witchcraft and terror.

New York, summer 1975: a scorching heat wave, with asphalt sticking to shoes and kids playing around open fire hydrants. Silvia, Suzana, Olivia, Mathilda, Marco and Tony are 15 years old and eager for life; they kill the boredom by hanging out in Little Italy, getting into one scrape after another. Their favorite spot is the Coney Island fair. Abandoned for ages, it's become a no-go zone. Sprinkled among the rides are those old fortune teller machines. You push the red button and a card is supposed to come out and tell your future. But sometimes, something much more terrifying comes out…

The Neb Studio (story and illustrations)

Paris, 2019. At about midnight, Maelisse, a twentysomething multiracial student, gets onto the metro train that is supposed to take her home. However, many supernatural creatures appear during the trip. Overcoming each test, the Midnight Girl goes from car to car until she reaches, and confronts, the Patriarcat, a pitiless stag-man.

Ontario, winter 1977. A teen is in shock. His girlfriend has been pulled deeply under water by a strange creature. And it's not the first time. In reality, a wave of disappearances has been afflicting the city for several years. At the high school, Midnight Girls Camryn, Brandy and Aileen think it's their responsibility to investigate and find the attackers. Yet, Camryn's mother has strictly advised the three girls to stay away from aquatic creatures. Is she trying to protect them from a potential danger? Or does the lake hold other secrets that shouldn't be revealed?

Transylvania, 1993. Hannah, Courtney and Jessica, three American tourists, are hitchhiking through Romania with their tents and backpacks. One of their rides leaves them at the edges of a worrying village, refusing to go any further. The driver is consumed by a fear of vampires, like all the other inhabitants of the region. A few weeks later, Sheridan and Johnson head out on the trail of the three young girls who mysteriously disappeared…

Based on 7 customer reviews