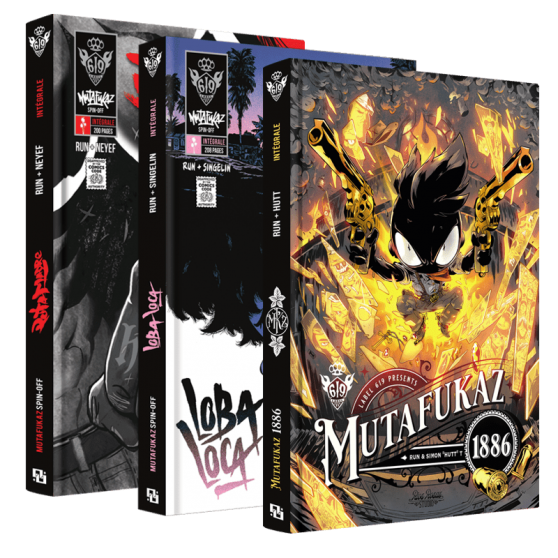 Puta Madre, Loba Loca and 1886 – Mutafukaz and its spin-offs in a complete set guaranteed to blow your mind. Don't miss a smidgen of the dark, underground Mutafukaz universe.

Niland, California. Surrounded by mobile homes rotting in the sun and dust from the desert that gets everywhere, 12-year-old Jesus tries to grow up as best he can without a father figure. One Halloween night he notices a strange, pumpkin-headed being in the vacant lot across from his house. No one else sees "Spooky", as he will later name it. But Spooky has a strange influence on Jesus, and regularly incites him to commit delinquent acts. And when his mother discovers his 2-year-old half-brother's dead body, Jesus has to face the investigators since all the evidence points to him.

Raised by her mother and at loose ends, Guada is frustrated and searching for her path in the filthy megalopolis known as Dark Meat City. A surprising road trip will set the young girl on the path to her future and on the trail of her past, even if it means meeting some unusual and unsavory characters along the way…

In this dusty alternate-history tale, featuring the warm colors typical of a western, Vinz and Angelino are faced with the Machos. These cosmic beings created from the dark matter of the universe have taken over the emerging mining industry in California.