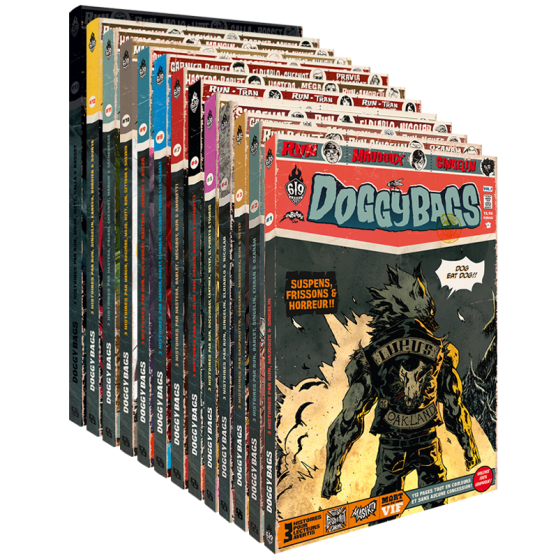 A Label 619 original, DoggyBags is a heartfelt tribute to pulp fiction and horror comics from the '50s.

More brutal than a shotgun blast to the face and more vicious than having a tooth pulled with a crowbar, DoggyBags is a homage to classic pulp fiction and horror comics from the '50s and doesn't mind playing rough. Engines roar, guns spit bullets, and blood flows by the gallon in a series full of joyful cruelty. Get your doggy bags ready, because there's gonna be meat left over.

"ElWood" by Kieran and Ozanam; "The Border" by RUN and Singelin; and "Vol Express 666" by RUN and Bablet

"Dia de Muertos" by RUN and Neyef; "La Danza de los 13 Velos" by Maudoux; and "Room 213" by Gasparutto and Guigiario

"Sélection" by El Diablo and Nicolab; "Lady in White" by RUN; and "Geronimo" by RUN and Singelin

"Soledad" by Pravia and Le Hégarat; "To Serve and Protect" by El Diablo and Chesnot; and "The City of Darkness" by Garnier and Bablet

"Patriot Act" by RUN and Act; "Opération Wonder Land" by Hasteda and de Jebedaï; and "The Last President" by Ducoudray and RUN

"Shiganai" by Bordier and Sourya; "The Man from Paris" by Kaneko; and "Samurai" by RUN and Singelin

"Slaughter House Blues" by Calla and Rosset; "Killer Klowns from da Hood" by RUN, Mojo, and Hutt; and "Times Scare" by RUN

Did you find this helpful? Yes 4 No 0